ALL Race days are on  the Sunday of the weekend.

The Castle Combe format will be 15 minutes qualifying, and 2 x 15 minute races.

Pembrey format as always is 15 minute qualifying and 2 races x 15 minutes plus one lap.

Hi all. We have excellent news about the rebate scheme for 2016 which will be applied for all Pembrey meetings in 2016 PLUS Castle Combe! (link to dates here)

This year, rebates start when we get grids of 17 cars or over!

When we get over 30 cars, the net cost per competitor come down to just £170, which is fantastic value! Probably the best in UK. BUT we need your help! Get in your £300 initial entry fee per meeting AS SOON AS YOU CAN, as this year we again have some payments to be made up front. This is particularly true for the Castle Combe round where we’ll need payments 6 weeks in advance, so please start planning now! We’re counting on you! *DON’T FORGET – to do this we need all of you to encourage as many as possible of your racing friends to enter, and we need you all to enter well in advance of the meetings.  If you do that, then you will get the BEST VALUE RACING AROUND! So, as last year, please enter well in advance, and make sure we receive your payment of £300 ASAP! NB Please help us by using BACS/Internet Banking to make your payment!  Bank Transfer Details.

As last year, rebates from the 1st meeting can be applied to the 2nd meeting and so on, or you can pay £300 for each meeting and have your rebate for the whole season after the last meeting. Your choice!!  Where else would you get such flexibility! We look forward to your continued support.

Good luck, and get registered ASAP! All the forms you need are here on the web site.

If you cant download, let me know and I can e-mail them; or even post them!  Best Regards  Alan

Veteran Cardiff racer Julian Westwood (& his team-mate Ian Loggie) sealed  the Class AM Drivers title by a single point, after a hard fought race in the final round in the 2015 Blancpain Endurance Series, making it the first International win for a Welsh Driver in the Modern era, and to mark this Jules was given a special award from the WRDA. 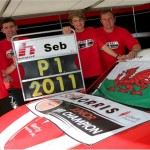 WRDA member Seb Morris revealed he is set to snub a return to the GP3 Series in 2016 and seek a sportscar ride in order to further his career. His mentor and near neighbour, Andy Meyrick has done well in enduros + had some great results!

The twenty-year-old Welsh revealed he has had various offers from the world of endurance and GT racing, citing the ridiculous costs of getting to Formula 1 for his reason on potentially turning his back on single-seater racing. Seb came to prominence after winning his first Championship with Ginetta in 2010 and became the 2011 Welsh Young Driver of the Year having been the youngest winner of a major Championship – Ginetta Juniors & 2010 Ginetta Winter Series!

Seb spoke at the Autosport show to The Chequered Flag. com .

See the full interveiw on The Chequered Flag. com
http://www.thecheckeredflag.co.uk/2016/01/seb-morris-the-f1-option-is-completely-dead/

Interestingly at the same tinme, Ginetta  revealed their latest racer, the G57!
http://www.thecheckeredflag.co.uk/2016/01/ginetta-duo-praise-incredible-new-g57-prototype 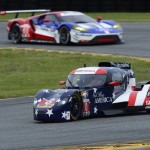 Andy (left) with Katherine and Sean

Andy Meyrick is in sunny Florida getting ready for the Rolex 24 hr race (part of the WeatherTech championship) on the Daytona International Speedway and confirmed he is really happy to be rejoining the DeltaWing Racing Team with their innovative cars for 2016 in the USA based Imsa Racing Series, starting this weekend with the ROAR test. Underlining his abilities as an endurance racing expert, Andy will compete with DeltaWing for the Rolex 24 at Daytona over the weekend of 24th-25th January with team-mates Katherine Legge and Sean Rayhall . “The team made some really progressive developments, and we scored our best result with a P4 at Petit Le Mans in October, so hopefully we can be just as competitive at Daytona. This’ll be my first race of the season and I’m training hard in preparation.”

atch as Andy Meyrick takes the Panoz DeltaWing Racing coupe around the 3.56 mile Daytona track at the 2016 Roar Before the 24. Cutting through the traffic in practice session 4, the DeltaWing DWC13 is looking fast and in good shape for the Rolex 24 Hours of Daytona!

Andy Meyrick’s impressive track-record includes a fourth place finish at the 24 Hours of Le Mans; the highest placed rookie on the highly-competitive grid, a second place result at Sebring with Dyson Racing and a season with the Aston Martin works team in the Intercontinental Le Mans Cup (ILMC) and in the Nürburgring’s VLN series, where he secured a win and two second place finishes.

After winning ten races in his first season of motorsport in Formula Ford in 2005, Andy progressed through British racing up to British F3 in 2008, taking seven victories from 12 starts. In 2009, Andy raced in the prestigious Le Mans Series for the first time, including a fourth place finish at the notoriously difficult Nürburgring. In 2010 Andy contested the American Le Mans Series (finishing on the podium in every start) and made his Le Mans 24hr debut, finishing fourth overall. With a works drive in 2011, Andy raced in the ILMC, VLN and once again at the Le Mans 24hr. His flair for endurance racing was further developed in 2012 through competition in the Spa 24hr.

Since 2013, Andy has spent time racing on both sides of the Atlantic. In Europe, Andy raced in the Blancpain Endurance Series while in the USA he was lead driver for the innovative DeltaWing Racing programme. In November 2013, he was announced as one of three British drivers to return Bentley to the motorsport arena with the new Continental GT3, following several successful development tests. The 2014 season saw Andy & his team-mates win two races and finish as runner-up in the Blancpain Endurance Series, a feat they repeated in 2015! 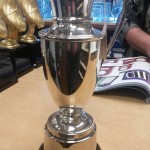 The new Claret Jug Trophy, has kindly been donated by Colin Gundersen for the new ‘Fastest Lap’ championship. ‘The Colin Gundersen Trophy for the Class Fastest Race Lap at Pembrey. Colin won the Welsh Sports & Saloon Car Championship in 1992.