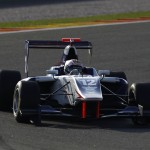 Matt Parry, Jan Mardenborgh and Seb Morris are in Hungary this weekend for the latest races in the 2015 GP3 season, with each of them looking to add to their points tally.

Matt & Seb both picked up their first points of the year in Austria. Matt then followed up with a 3rd place in Race 1 at Silverstone and 5th place in race 2, although neither Jann or Seb managed to score any points. @Mattparryracing did a Twitter Q & A session earlier, here is a summary of the best answers! https://storify.com/gp3_official/twitter-q-a-from-budapest

Meanwhile Seb Morris is hoping to build on a competitive outing on home ground at Silverstone a fortnight ago, where he produced his most promising qualifying run of the year and only just missed out on adding to his points tally, after piccking up an unfortunate track limits penalty.  Seb is however determined to make continued progress a few days from now.

Qualifying is likely to be the most important factor in Hungary, a circuit which is notoriously challenging where overtaking is concerned. With passing opportunities seriously limited, Seb says the ability to put the perfect lap together in the grid-determining session will be paramount. “Hungaroring is a track which should be good for hooking a lap up in qualifying, but it’s very aero dependent so racing will be difficult and overtaking a real challenge”, commented Seb, “That only emphasises what I need to do in qualifying, it’s going to be so important to nail that lap time to make sure we’re as high up the grid as we can be for race one.’

Currently Jann is 7th in the points standings with 32 points, Matt is now 9th with 23 pts and Morris is 13th with 6 points. The series is led by Luca Ghiotto from Italy with 82 points. 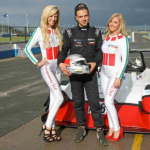 WRDA member Ben Hingley is currently 3rd in Formula Jedi after 6 races of the 14 race series having won 3 of the races and had other podium places and with 30 points for a race win, he is well in touch with championship leader!

who started out in rallying, is racing in the Sports 2000 championship driver with the Welsh SVG Racing Team in an MRC car which is made in by WRDA member Clive Hayes in St Davids, and was leading the drivers points table of the UK Sports 2000 Championships after scoring 2 podium places at Donington Park.

Both Ben & Cameron are supported by The Sport Wales Elite Cymru scheme which the WRDA worked with the Welsh Association of Motor Clubs and the Sports Council of Wales to set up the motorsport side of the scheme! 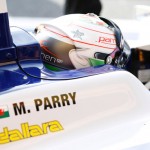 MATT MAKES THE PODIUM AT SILVERSTONE!

Matt Parry’s increasingly rapid rise through the GP3 ranks continued apace at his home event at the weekend, as Matt from Cardiff claimed his first series podium in only his fifth outing with the Koiranen GP team.

After coming close to opening his points account on debut in Barcelona, Parry racked up a seventh-place finish last time out in Austria, but arrived at Silverstone confident that both he and the team knew how to approach the former airfield circuit. The Welshman’s last outing on the hallowed tarmac had come at the wheel of an F1 McLaren at the end of 2014, while Koiranen won at the British Grand Prix meeting twelve months ago, putting Parry’s current team-mate, and GP3 veteran, Jimmy Eriksson on the top step.

Confident that he could quickly home in on the best set-up, Parry produced the fourth-fastest time, setting himself up for a strong run in Saturday’s early morning qualifying session. Unfortunately, the combination of overnight rain and other classes sharing the circuit over the weekend meant that the track characteristics changed completely by time the GP3 boys were back in action but, despite a belated start to his session, Parry was soon back in the groove, posting successive times good enough for second place before eventually having to settle for fourth on the grid.

“It was good to be fourth fastest in practice, but I was still nine-tenths off the best time,” Parry commented, “It’s so easy to lose tenths here and there around a long lap like Silverstone, so we went through the data to see where I was missing out and, after scrubbing in a set of tyres early in qualifying, I put in a series of laps good enough to keep myself in the top four, but with a much reduced two-tenths margin to the pole time.”

With Pirelli providing its hardest tyre for the weekend, making the rubber last in the 40-minute Saturday evening race would not be as big a problem as in earlier rounds, and Parry put himself straight into a position to challenge for the podium by passing fellow second row starter Alex Palou as the lights went out. As the top three began to break away from the group behind, Parry began to put pressure on second-placed Emil Bernstorff but, having been denied a chance to pass, opted to concentrate on preserving his tyre through the middle of the race. Comfortably clear of the chasing pack, the Sport Wales ambassador was able to watch with interest as the top two battle over first place before joining them on the podium.

“I made a good start and was straight into third place as Palou was slow away,” Pa

rry confirmed, “I tried to push Bernstorff into a mistake early on before stabilising my pace midway through the race to ensure there would be no problems with the tyres in the closing stages. I then watched with interest as the top two came close to running into each other – which would have been the perfect finish – but I was delighted with third place, especially after a tough couple of rounds in Spain and Austria.” (Photo Matt shows his Welsh roots by drinking the champers. not just spraying it)

Third in race one translates to sixth on the grid for race two and, again, an aggressive Parry was able to make up places early on. Passing race one winner Marvin Kirchhofer, championship leader Luca Ghiotto and Bernstorff in the space of a couple of laps promoted the 21-year old into fifth place, where he once again found himself running in tandem with Koiranen team-mate Eriksson.

“I thought I had made a good start, but it seems others made even better ones,” Parry smiled, “Despite dropping back briefly, however, I was still able to pass cars comfortably, and I was able to retake Ghiotto at Luffield before going to the inside of Kirchhofer at the Loop next time around. Bernstoff made it easier for me by running off the road while trying to pass my team-mate, so I was quickly up to fifth. Jimmy was tougher to pass, but I know that I had the pace to challenge for another podium had I been able to get by him. I took a couple of looks into Copse, but it’s hard to pass there and I couldn’t try anything too risky. Nevertheless, fifth place meant more solid points and a move up the championship table. I said after Austria that I just needed a clean weekend to show what I could do, so it has been very positive – and very satisfying.”

Round four of the 2015 GP3 Series season takes place at the Hungaroring in Budapest over the weekend of 24-26 July, but there will be several chances to relive Parry’s Silverstone performance, with his podium run in race one being re-run on Sky Sports F1 on Tuesday 7 July at 7.30pm and Sunday 11 July at 9.00am. Race two re-airs on Wednesday 8 July at 5.00pm and Sunday 11th July at 10.00am. 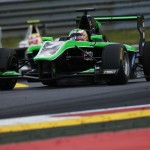 Silverstone Grand Prix Circuit plays host to rounds five and six of the GP3 Series this coming weekend, 4th/5th July, where Welshman Seb Morris is determined to build on the superb top five performance he delivered during the previous event in Austria just over a week ago.

Securing his first points in the prestigious FIA Formula One World Championship support category during round four, thanks to an exceptional drive through the order from 19th on the grid to fifth, the MSA Team UK and FIA Institute Young Driver Excellence Academy racer is determined to use the performance as a springboard to greater success with Status Grand Prix on home soil at Silverstone.

Rocketing up the championship table into 11th position last time out, the Marford 19-year-old is in buoyant mood ahead of Silverstone and is relishing the prospect of competing on ‘home’ soil again at a venue where he has enjoyed great success in the past.

Winning on the Grand Prix track last year in the Formula Renault 2.0 Northern European Cup (NEC), in 2013 Seb took an excellent podium hat-trick at the Northamptonshire venue in the BRDC Formula 4 Championship. During his debut season in single-seaters a year earlier, he was a double winner in Formula Renault BARC on Silverstone’s shorter National Circuit.

“It’s going to be enjoyable being back at Silverstone, it’s obviously my home race and the home race for the team as well so, hopefully, it’ll be a good weekend”, said the Serge DeNimes and Oxford Vaughan ambassador, “I know how fast I can be at Silverstone, I’ve won there several times over the years and knowing the track will be a little bit of an advantage.

“Red Bull Ring was a big step forward in race two, we still need to make improvements for qualifying but hopefully we can keep progressing and have an even stronger weekend at Silverstone. I’m really looking forward to being back there – it’ll be great racing in front of the British fans again.”

Sport Wales, which is supported with National Lottery funding, was inaugurated in 1997 and works to champion the very best young sporting talent across a wide variety of disciplines, developing and promoting both elite and grassroots sport.

“I feel very honoured to have been invited by Sport Wales to be part of the programme for a second year”, said Seb, “As everyone knows, I’m very proud of my Welsh heritage and it’s fantastic to be able to fly the flag on behalf of Sport Wales on the international stage in GP3.”

Practice at Silverstone will take place at 17.50 this coming Friday, 3rd July, with qualifying following at 08.45 on Saturday, 4th July, and race one of the weekend – round five – beginning at 16.20.

On Sunday, 5th July, round six will get underway at 08.10 on the morning of the British Grand Prix and coverage of both GP3 races will be screened live on the Sky Sports F1 channel.